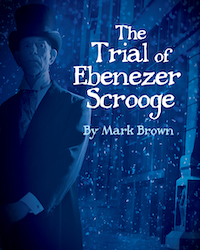 The Trial of Ebenezer Scrooge

The Trial of Ebenezer Scrooge By Mark Brown The Trial of the Century! A year after his miraculous transformation, Ebenezer Scrooge is back to his old ways and is suing Jacob Marley and the Ghosts of Christmas Past, Present and Future for breaking and entering, kidnapping, slander, pain and suffering, attempted murder and the intentional infliction of emotional distress. The ghosts employ Solomon Rothschild, England's most charismatic, savvy, and clever barrister. Scrooge, that old penny pincher, represents himself. One by one, Bob Cratchit, Scrooge's nephew Fred, solicitor and philanthropist Sara Anne Wainwright, and the ghosts themselves take the witness stand to give their account of the night in question. But the Spirit of Christmas Future breaks down under heavy questioning and confesses that Jacob Marley forced the spirits to break one of the rules of redemption: Do not use a dead body to scare someone into redemption, for the consequences could prove fatal. Judge Stanchfield Pearson gives his verdict: Jacob Marley and the Spirits of Christmas, guilty! Pearson fines the spirits 40,000 pounds apiece and terminates their redemptive duties. Rothschild desperately pleads with the judge not to terminate the spirits of Christmas. It's a death sentence. But in another staggering turn of events, Scrooge makes the spirits an offer: work every day, not just one day a year, and he'll drop the charges. The spirits agree and, to everyone's amazement, Scrooge does drop the charges. But he's keeping the money the ghosts owe him to start a fund to help the poor. Everyone stares at Scrooge. And then ... a twinkle in Scrooge's eye, a smile and giddy, joyously delirious laughter. Scrooge confesses that Jacob Marley and the Spirits of Christmas had to go to extraordinary measures to change him, so he had to go to extraordinary measures to change the Spirits of Christmas. The spirit of caring and giving should be every day, not just once a year. Scrooge then leads the stunned crowd to his house for a wondrous party. Time period: 1843 Run-time: 100 minutes, 1 intermission.

This is a ticketless event. You will be checked in at the door.