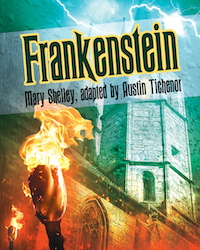 Frankenstein By Mary Shelley Adapted by Austin Tichenor Performances – October 6-9, 2022 in Theatre School Studio Space Mary Shelley wrote Frankenstein in 1816, and it caught the public imagination almost immediately. The first stage adaptation was written in 1823, and since then countless film versions, parodies, and modern interpretations have changed the associations we have with the Frankenstein name. Shelley's novel offers many pleasures, but fulfilling the horror-movie expectations of the modern reader isn't one of them. This adaptation attempts to be faithful to Shelley's original themes, characters, mood, and literary sensibility while at the same time giving an audience a little bit more of what it expects from something called “Frankenstein.” It's George Bernard Shaw meets Stephen King. Time period: August 1816 Settings of play: Switzerland, Europe and across the globe Run-time: 100 min, 1 intermission. Type of Play: Drama Thriller Suggested rating: PG – recommended for grades 2nd & up, but all audiences may enjoy. This is a ticketless performance. You will be checked in at the door.