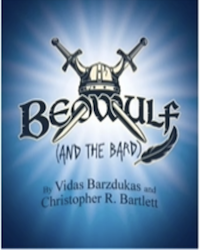 Beowulf (and the Bard)

Beowulf (and the Bard) By Vidas Barzdukas and Christopher R. BartlettBeowulf (and the Bard) is a fun, frenetic and freewheeling farce that updates the Old English poem about the warrior Beowulf, who must rescue the mead hall from a hideous ogre (and his even more hideous mother). Told through the eyes of the epicâs writerâa character known simply as âthe bardââthe comedyâs events unfold much differently than the familiar story passed down through the ages. In reality, Beowulf is an out-of-shape prince hoping to fulfill the heroic code, while the bard is a desperate poet struggling with a nasty case of writerâs block. This retelling also introduces a new female character: the bloodthirsty warrior princess Gunborg, whose quest to reach her heroic destiny is ignored by her overprotective father, the king. Beowulf (and the Bard) is a comedy about friendship, duty and what it means to be a hero. Time period: Sometime between 975 and 1025 Settings of play: Denmark