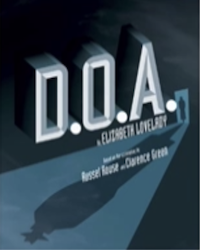 D.O.A. By Elizabeth Lovelady Based on the screenplay by Russel Rouse and Clarence Green Frank Bigelow walks into a police station to report a murder: his own. One day earlier, the small-time accountant kissed his girlfriend and secretary, Paula, goodbye and left on a trip to San Francisco with mysterious intentions. Shortly after he arrives, he's invited to join a group of rowdy businessmen celebrating with their clients after a successful market week. After a wild night, he wakes feeling ill. A doctor and detective arrive to deliver tragic news—Bigelow has been poisoned, and he only has hours left to live. Bigelow frantically searches the city for his killer and the reason he was targeted. Each person he encounters gives him a piece of the story that includes a mysterious suicide, a shady business deal gone wrong, and conniving women. But can he believe anything he hears? Paula desperately searches for answers as Frank phones home with cryptic questions and an ever- increasing sense of doom. Will he unravel the mystery before his time runs out? Will the killer be brought to justice? An adaptation of the 1950s classic noir film, D.O.A. is a swiftly moving thriller that will keep audiences on the edge of their seats. With cigar-smoking detectives and gun-toting femme fatales, D.O.A. includes all the noir tropes plus updates to the story that will appeal to modern audiences. Time period: August 1951 Settings of play: Several locations in Sacramento and San Francisco, Calif. Run-time: 60 min, no intermission. Type of Play: Murder Mystery Thriller THIS IS A TICKETLESS EVENT MASKS ARE REQUIRED BY ALL PATrONS INSIDE VENUE