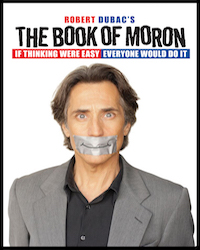 The Book Of Moron!

intelligence and absurdity he crashes head first into the

barriers of sex, race, religion, politics and the media. And

he’s not alone. With mesmerizing ease, he portrays

multiple characters who all take turns beating the hornet’s

nest of hype and spin with the big stick of knowledge. It’s