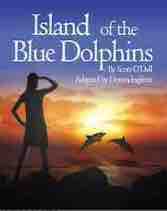 Island of the Blue Dolphins

× Island of the Blue Dolphins By Scott O’Dell Adapted by Donna Inglima World Premiere of this adaptation! Far off the coast of California looms a harsh rock known as San Nicolas island. Blue dolphins splash surrounding in the water surrounding it, sea otters play in the kelp beds, and seabirds roost in its crags. Once, Native Americans also lived on the island - until one day they decided to leave and sailed to the east. A young girl was left behind. Karana is that girl. Year and year, she waits for the ship to come back. But it never does. Finally, she realizes she must make a fateful choice: follow her people on her own or remain alone on the island for the rest of her life.