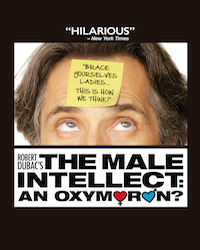 The Male Intellect: An Oxymoron

× ‘Hilarious’ is the only way to describe Off Broadway's hit, THE MALE INTELLECT: AN OXYMORON? as Robert Dubac, ransacks his brain to answer the age old question, "What do women want?" This hit one-man show pinpoints the differences between the sexes and then celebrates them with ninety minutes of non-stop laughter. It is a multi-character comedy with Mr. Dubac playing all the roles. No intermission