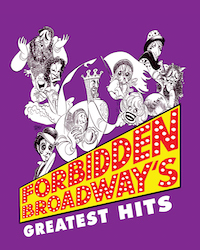 Created and Written by Gerard Alessandrini Directed by William Selby Celebrate Broadway’s unforgettable musical legends! Meet Broadway’s greatest satirist in this hilarious, loving, and endlessly entertaining tribute to some of the theatre’s most cherished stars and songwriters. FORBIDDEN BROADWAY’S GREATEST HITS parodies Broadway musicals including Chicago, Phantom of the Opera, Fiddler and many others, with wit, charm, and hysterical lyrics. This world-renowned show will be a hit among seasoned theatregoers and newcomers alike. This musical is your one-stop ticket to non-stop laughs!